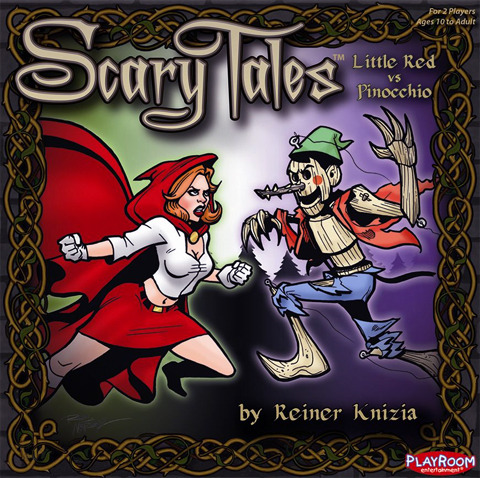 $0.00 In-Store Pickup Only
Add to Wishlist

Little Red vs. Pinocchio is the second game in the Scary Tales series of two-player games pitting common fairy tale characters against each other. Here's more about the two characters in this game from the publisher:

"Little Red is a scorned girl on a mission to prove that you may be able to fool her once, but you can't fool her twice! Pinocchio is a fibbing, scheming puppet that won't let you pull his strings. They both want to rule over the land, and they've got the drive to win. With the help of their companions, the Woodsman and the Cricket, each of them will be tough to beat."

The setting for Scary Tales is a kingdom, where a battle awaits as the king has died, leaving no heir. While the enchanted forest is feared and the castle is covered in dark clouds, corruption has affected the town and only those with the utmost abilities in Strength, Wisdom, Magic and Luck will be able to collect enough relics from the stories of long ago to prove themselves worthy of being the new leader. The challengers are sharp, indomitable, and devious - and with each match-up, it is uncertain who will win the crown.

Each character comes with its own unique ability which may be used once per game and a color coded set of dice. A set of power cards and fortune cards, a fairy card and a die associated with said fairy comprise the contents of the game. To win, a player needs to obtain seven points worth of relics, and hold on to them until the beginning of their next turn.